“SMOKING WITH THE BOYS”

Smoking with the boys…and why not?

Cherry Pickles admits to admiring a certain license to “live it up” that’s accorded men in art. Their talent justifies their behaviour. They can get blind drunk and trash the apartment of their sponsor, or drive into a ditch and kill their pretty young passengers. It’s all excused. They are larger than life. Her admiration powers her inspiration. She will be larger than life. She will imagine an ideal, dissolute realm of women bursting with talent who have no need to kow-tow to a sisterhood or think good thoughts. Each of them will down a bottle of Scotch before painting a masterpiece. Each will be tough as shit, wear y-fronts rather than panties and paint as if driven by a demon. The energy and the vigour that distinguishes the work of the boys has now been hijacked by the gals. They’ll smoke twenty a day and fell trees when they aren’t crashing cars or gate-crashing parties. All too often the artist can be trapped by a sense of responsibility – keep things considerate, aware, and scaled down so as not to offend modesty. Well, fuck that. Come and party with Cherry, the meanest ma’am on the block. 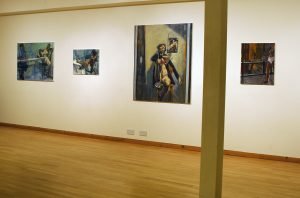 Cherry Pickles at The Room 2017 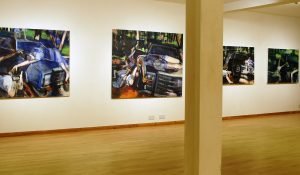 Cherry Pickles at the Room 2017

“I think that what makes any painting interesting is trying to deal with conflicting forces.

What I’m reacting to in these paintings is the myth rather than the reality of the artists. It’s the unbridled licence for fun  and complete disregard of responsibility ending in tragedy that makes their myths so attractive to me. I want to make fun of the myth as well as celebrating and being susceptible to it.  I don’t know if I’m doing it for women generally (the men involved in the  paintings were certainly as enthusiastic as the women). But, for the men, it is all excused. Some people find it funny and some very uncomfortable (both men and women). The work is a kind of absurd fake autobiography.”

But is this a smokescreen for the deeper dynamic that charges these paintings? There is a swift complex energy here that is well able to create the zestful complexity of Jackson Pollock in a new figurative language; so the work challenges the power of such talented men in art, very actively indeed. Adding a reference to their life-style is a wry irony. The paintings can fend for themselves. 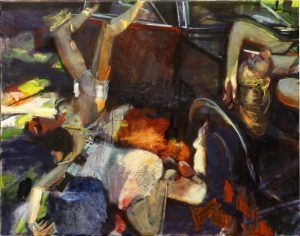 Women are now as bad as men 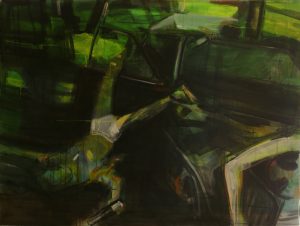 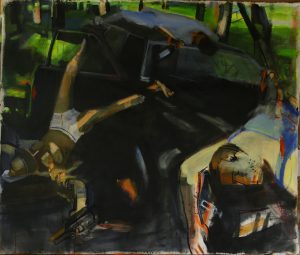 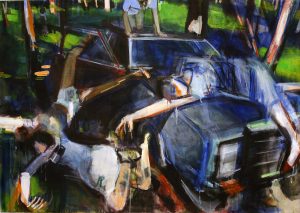 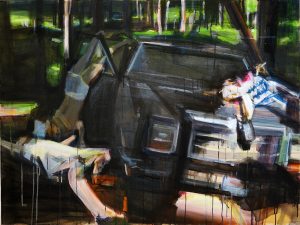 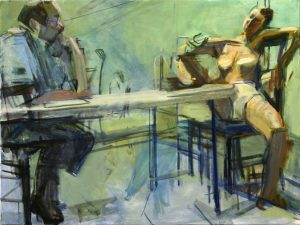 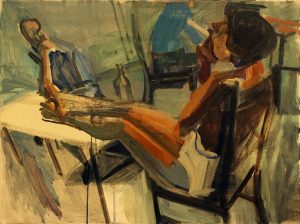 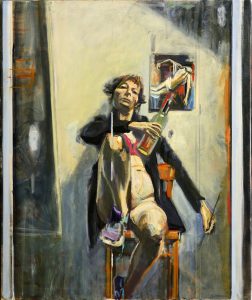 The Glass between us 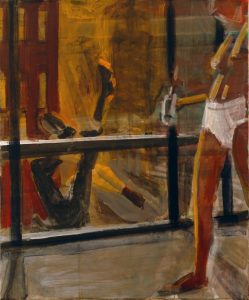 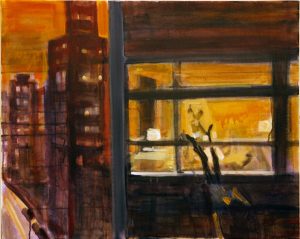 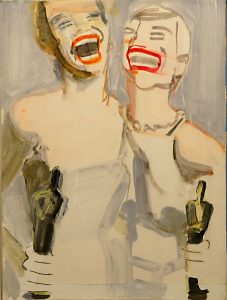 To view past exhibitions please visit our Archive here.