Weekends through November from 10 am – 8 pm

Ian Bourn: The Double-Mirrored Self 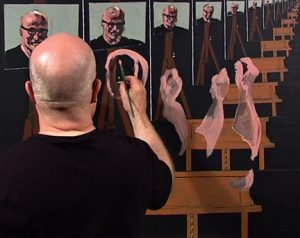 Over recent years, I’ve produced a number of mixed media gallery installations based around the idea of ‘finished paintings’ as essentially ‘remnants’; arrangements of stains and coloured marks left after various performed actions with a paintbrush.  In these pieces, the concern has been more with depiction of process than with arrival at a resolved image or visual statement.

In Self-Reflective, an ongoing project begun in 2015, I made a series of works that combined moving image media and painting to create a form of ‘time-based self-portraiture’, with sequences of pre-scripted or improvised image making.

The primary aim was to paint the ‘act’ of painting and record an ‘objective’ view of myself performing in the role of ‘artist’. I devised a method of ‘objective self-observation’ that used two mirrors, allowing a rear-view of my body and a way of seeing myself as ‘someone else’. A video camera filmed the entire process of applying paint, and was set up so that the painting’s composition filled the film-frame exactly.

In 2-Mirror Self-Portrait, Version 4 ‘Cornered’ (2015), the ‘artist’ is seen from behind working on a ‘picture of himself at work’.  The image he paints includes the mirror he is using (seen left of the painting itself), and allows glimpses of his face as he refers to it.  The ‘artist’, watching and recording his own actions, becomes locked in a perpetual game of catch-up, in which every new brush stroke applied, triggers further modifications, as each ‘picture within the picture’ is updated. In this mise en abyme, of canvases multiplying and reducing in size towards one corner of the composition, the ‘artist’ paints additional versions of himself, each new ‘self’ painted over and slightly obscuring its predecessor.

In 2-Mirror Self-Portrait, Version 5 ‘Grimoire’ (2016), I became preoccupied with the ‘hand trying to paint the hand painting itself’.  Its ‘book of spells’ title comes from the growing awareness of my ritualized actions, and refers to an older meaning of ‘art’ in which magic is performed with wand/pencil/brush.  The ‘artist’ both paints himself into the picture and paints himself out.  The end result is a black canvas, whose visual history lies buried under the layers of over-painting.

This exhibition, originally planned for two years ago, was suggested by Anthony Howell after he saw my nominated presentation at the Juda Foundation Award in 2019. This led to many an interesting conversation between us regarding reflexivity in art. 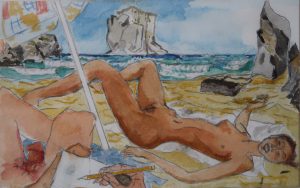 For further images click sketching and walking away reduced

In the early years of this century I went on several trips to lands where more sun was to be found than in the British Isles, including the Costa Verde and Fuerteventura in the Canaries. My companion and I sunbathed and sketched – and on the Costa Verde we could do this without clothes on.

I became interested in contrasting the vertical pole of the parasol with the curve of the beach and the curves of the body, and this led me to see that my pencil was another vertical which might be used. This then prompted me into including my own hand, my own knees etc in the drawing as I sketched. As I did this, I was reminded of the paintings of John Bratby – of the artist painting a picture – which included the hands of the painter.

When we see, when we type, our self is there within our peripheral vision, but usually we edit this out as we focus on that which has caught or requires our attention. Yet these outcrops of our own body can provide a context for what it is that we see. Portrait gets mixed with self-portrait.

I consider myself a “Sunday Painter” – I don’t care to invest too much significance in what scheme I may devise. I like to preserve my freedom to do anything. In Summer I like to go out and paint what I see, for the pleasure of being outside and of seeing what there is outside. In Winter I may retire into the cave of my imagination, devising games for myself. Back in those idyllic days of campsites and secluded beaches, I wanted to remind myself of my own presence as well as that of my subject.

Howell’s first book of poems, Inside the Castle, was published in 1969. In 1986 his novel In the Company of Others was published by Marion Boyars. Another novel Consciousness (with Mutilation) has just been published by Odd Volumes at the Fortnightly Review. He was invited to the International Writers Program, University of Iowa in 1971. His Analysis of Performance Art is published by Routledge.  His poems have appeared in The New Statesman, The Spectator and The Times Literary Supplement. Articles on visual art, dance, performance and poetry have appeared in many publications including The Fortnightly Review, Art Monthly, The London Magazine, and Harpers & Queen. He is a Hawthornden fellow and in 1997 he was short-listed for a Paul Hamlyn Award for his poetry. His versions of the Silvae of Statius have been well received and Plague Lands, his versions of the poems of Iraqi poet Fawzi Karim, were a Poetry Book Society Recommendation for 2011. He is UK editor of Grey Suit Editions. He has recorded poems for The Poetry Archive. His latest book of Poems is From Inside, the High Window Press. He has worked in Wandsworth, Wormwood Scrubs and Brixton, teaching art and creative writing to inmates: an experience he considers to have been life-changing.

A former dancer with the Royal Ballet, and now a respected teacher of the tango, Howell was founder and director of The Theatre of Mistakes, which created notable performances worldwide in the seventies and eighties – at venues such as the Paris Biennale, the Sydney Biennale, the Paula Cooper Gallery, the Theater for the New City (NY) and at the Tate and the Haywood Galleries. Play-scripts of these performances are now being published by Grey Suit Editions.

To view past exhibitions please visit our Archive here, and Archive 2 here